The coronavirus pandemic caused a boom in athleisure wear, as many opted for comfortable clothing while they continue to work remotely. While the category has had several popular trends spring up over the last year — including tie-dye sweats, fashionable pajamas and the highly popular Nap Dress — men’s loungewear has experienced some of the most considerable growth and interest among customers over the last year.

According to data provided by Lyst, searches for men’s loungewear increased 43 percent year-over-year in 2020. Men’s sweats and joggers were the most popular searches, resulting in year-over-year increases of 39 percent and 51 percent, respectively.

Several brands — both specializing in men’s wear and others that have expanded into the category — have capitalized on this growing interest and experienced success during the pandemic with their offerings. Brands such as U.K.-based fashion label Desmond & Dempsey and CDLP have leveraged the fashionable pajamas trend with their own stylish offerings, while other athleisure brands such as Alo Yoga and Aviator Nation have consistently released comfortable loungewear that work for both in and out of the home.

Here, WWD looks at how seven men’s loungewear brands have stood out during the pandemic. Read on for more. 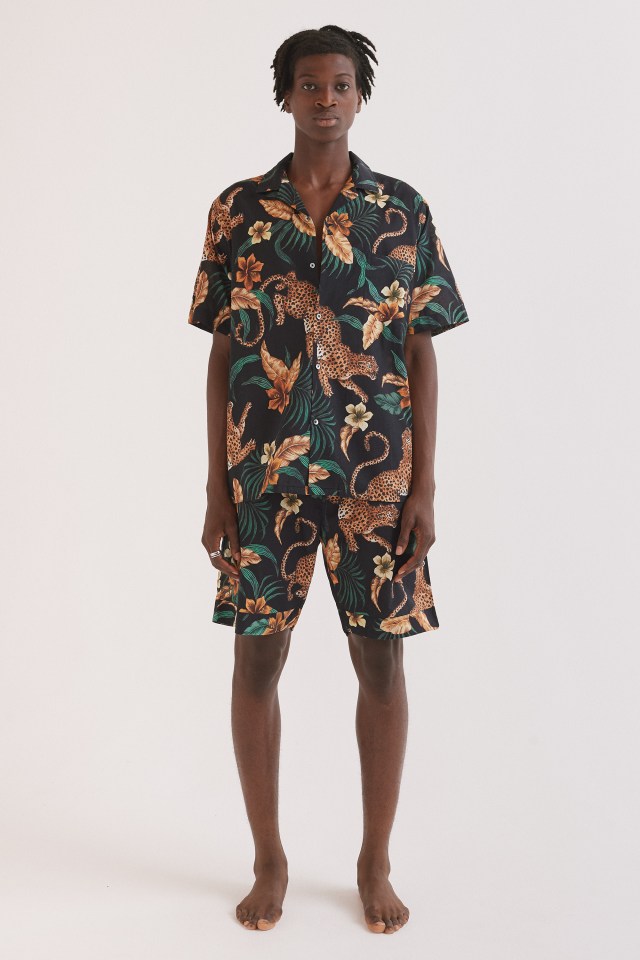 “Men are really loving the sets at the moment,” he said. “It took us by surprise originally due to the price point, and we made the assumption that guys would buy separates to wear with a T-shirt.”

For men’s wear, the brand offers pajama tops, bottoms, sets and robes, as well as accessories such as socks, slippers and boxers. Jeffrey said the pajama bottoms have become a bestseller since the brand introduced its sets. For its popular sets, its bestsellers in 2020 were its Tiger Cuban and Soleia Cuban options, which feature tiger and leopard print designs, respectively, as well as its new men’s pocket sets in cotton and linen.

Desmond & Dempsey is sold globally at retailers such as Neiman Marcus, Bergdorf Goodman, Selfridges, Harrods and Harvey Nichols, among others, as well as online on the brand’s website, Mr Porter and Matchesfashion. The brand’s men’s products range in price from $56 to $215. 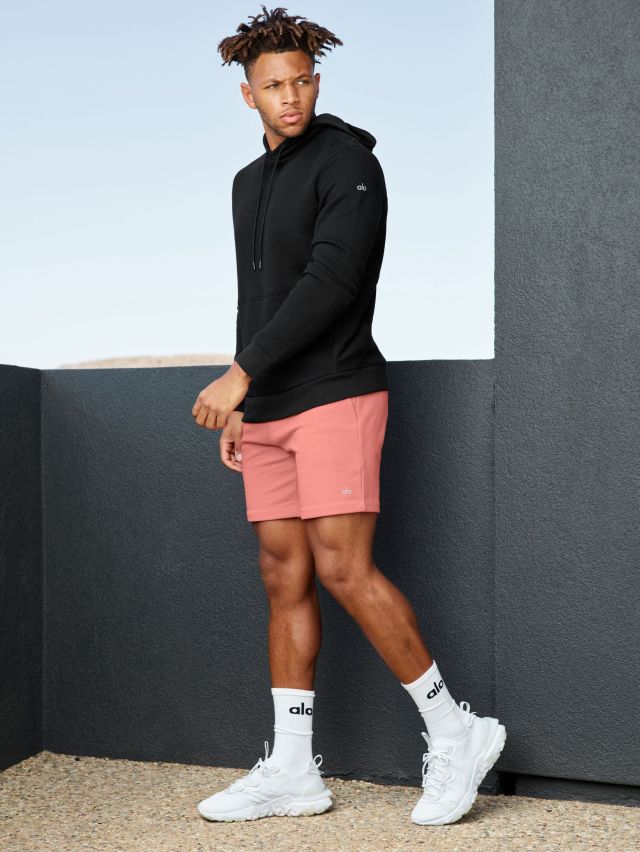 The brand also saw increasing interest among male customers for its Chill Short, a drawstring short with zip pockets that can be worn both in and out of the house. Other bestsellers include the brand’s Torrent Track Sweatpants and its Idol Performance Collection, which is made with a lightweight fabric that’s supposed to keep the wearer cool during a workout.

This year, Alo Yoga plans to continue expanding its men’s wear options with monthly drops of new colors and more street style-inspired options. The brand’s men’s offerings range in price from $14 for socks to $398 for a puffer jacket and are sold through its stores and website. 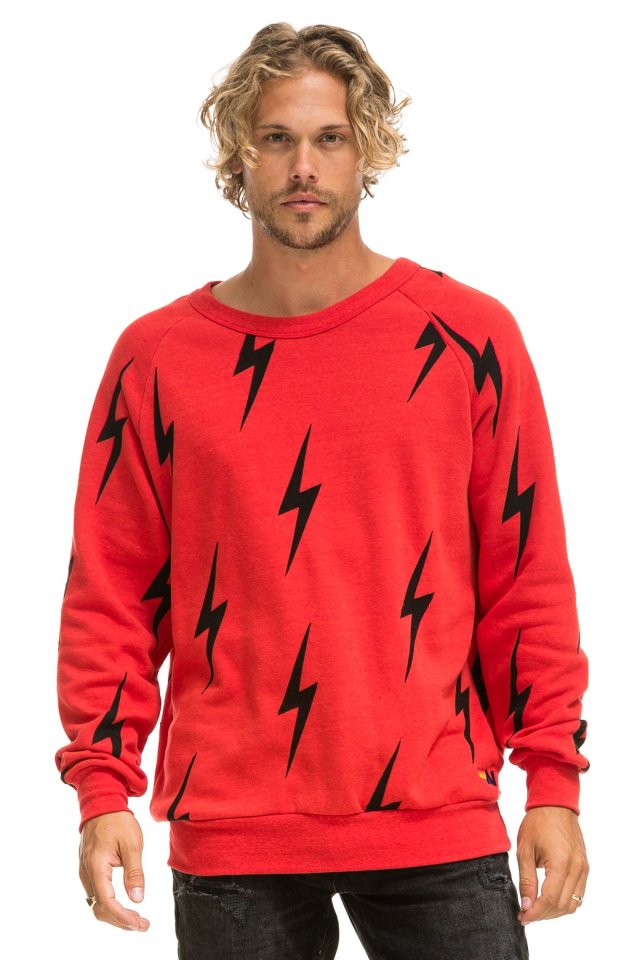 Lifestyle brand Aviator Nation experienced a boom in sales thanks to the growing loungewear trend during the pandemic. The brand saw sales increase by 130 percent during 2020, and also saw first-quarter 2021 sales grow by 130 percent.

According to the brand’s founder, Paige Mycoskie, the brand was already on track for 100 percent year-over-year growth pre-pandemic, as the brand has achieved that sales goal each year for the last five years.

Part of the brand’s growth has come from its men’s offerings. Some of its bestselling men’s offerings last year included its unisex hoodies, its fitted sweatpants and its sweat shorts. The brand’s next launch is its Bolt Stitch Repeat collection, which includes men’s hoodies, sweatshirts and sweatpants in red and black with a lightning bolt motif.

Aviator Nation is offered at its own 13 stores nationwide, as well as Nordstrom and Bandier. Prices for the men’s wear offerings range from $28 for face masks to $1,200 for a snow suit. 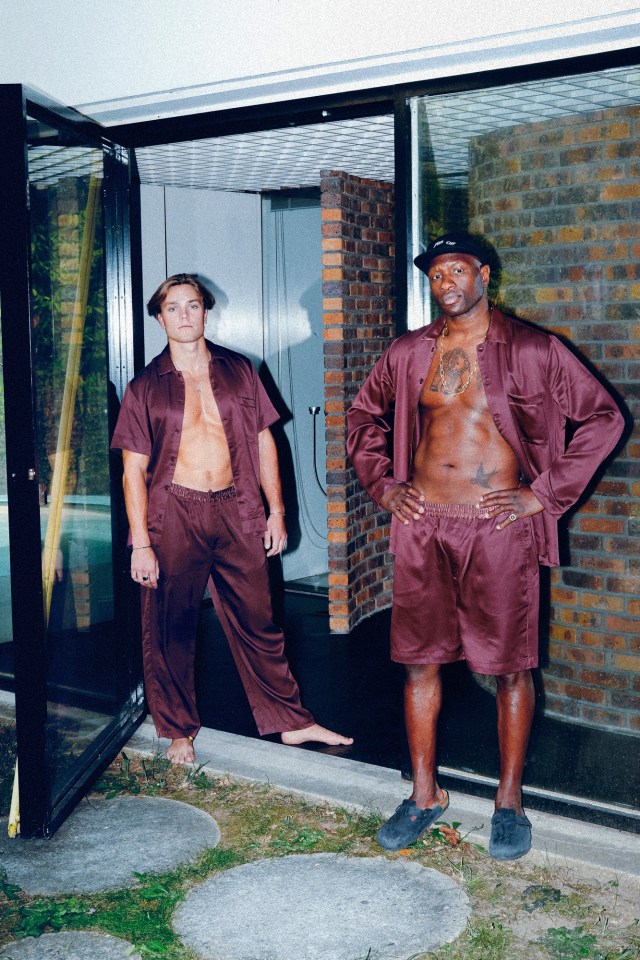 Swedish sustainable fashion brand CDLP deepened its footing in the activewear category last year with the launch of its Mobilité collection of performance wear essentials that included its now bestselling boxer brief.

Aside from its bestselling boxer briefs, the brand stated its T-shirts, swimwear and other loungewear also grew in popularity. CDLP also leveraged the fashionable pajamas trend last year with the release of its Home collection, which is described as loungewear meets ready-to-wear. The collection included robes, pajama tops and bottoms in the brand’s signature woven Lyocell fabric in navy and burgundy colorways.

CDLP is sold on the brand’s website and through Mr Porter, Matchesfashion and Farfetch. Products range in price from $20 for bamboo socks to $415 for the Home collection robe. 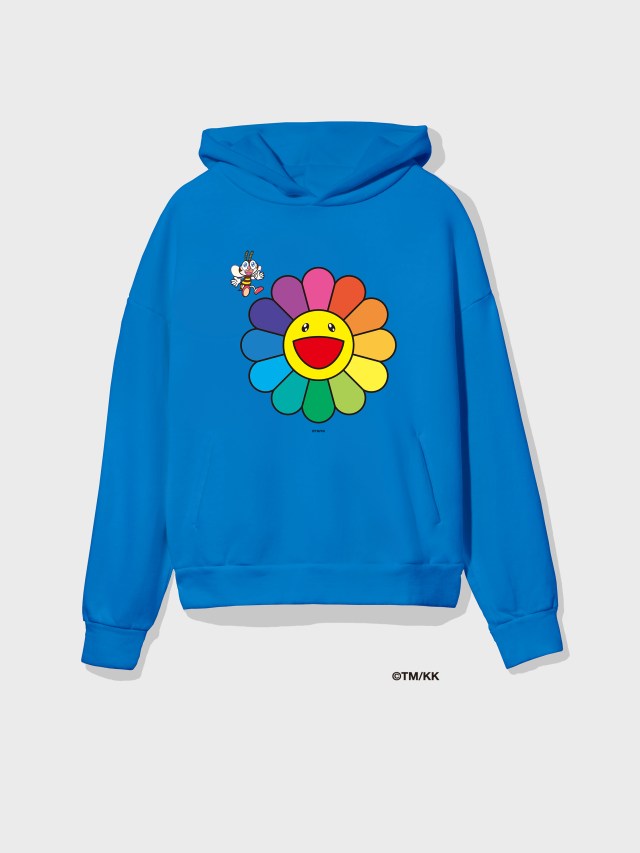 A style from the Takashi x Pangaia collection.
Courtesy of Pangaia

Eco-friendly fashion label Pangaia has seen growing interest over the last year in its men’s wear category, which includes sweatshirts, sweatpants, T-shirts, shorts, pajamas and outerwear. The growing interest as well as several capsule collections and collaborations led the brand to achieve its five-year financial plan goal in just one year.

For men’s offerings, the brand said its bestsellers include its Takashi x Pangaia collection, which included colorful loungewear featuring artist Takashi Murakami’s signature flower motif; its Flwrdwn collection made with recycled materials, and its hoodies and track pants.

Pangaia is sold through the brand’s website and its men’s wear offerings range in price from $55 for a T-shirt to $1,000 for an oversize puffer coat. 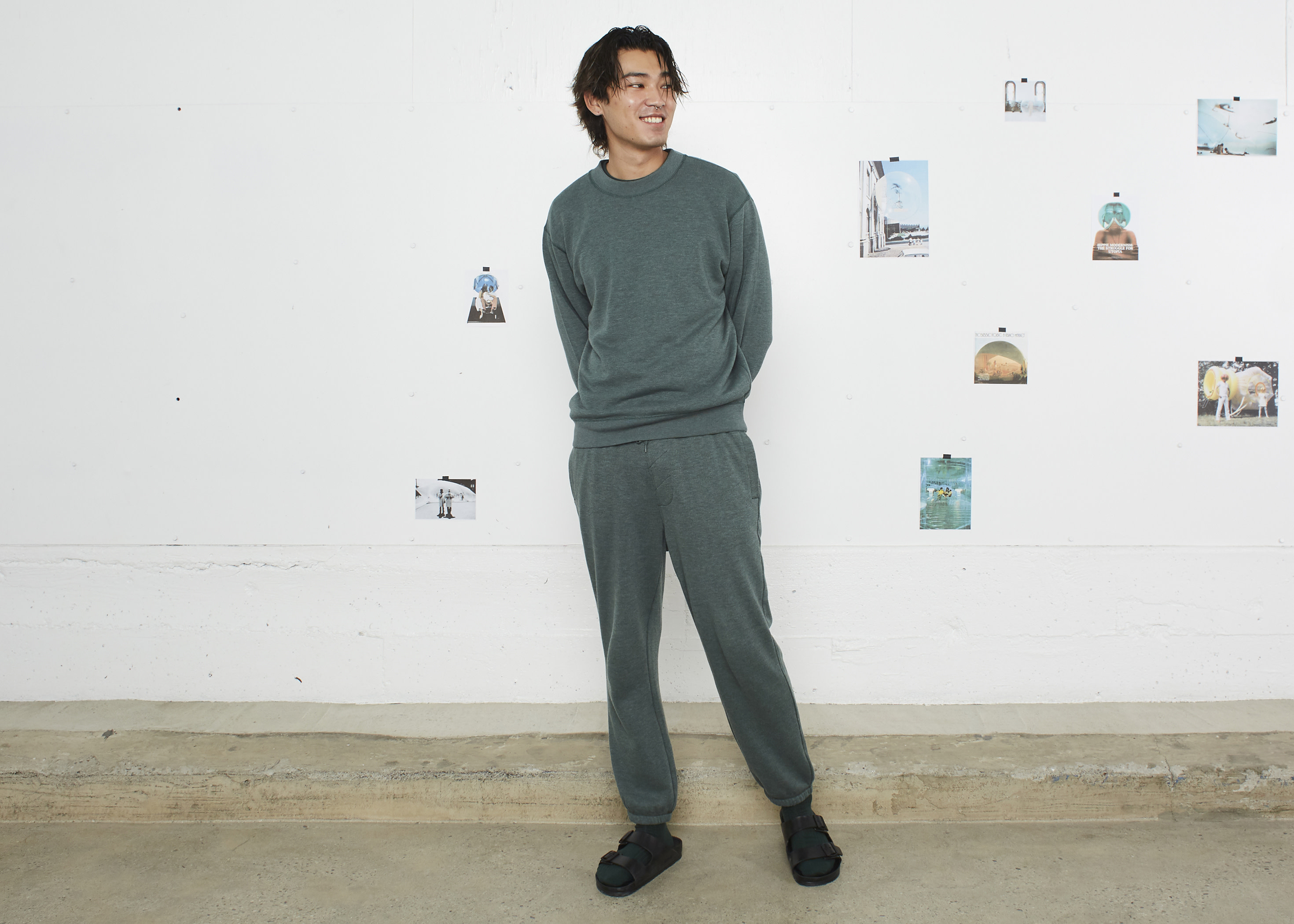 During the pandemic, the brand saw growing interest in its men’s sweatpants, sweatshorts and jersey boxer shorts. The brand also introduced its Giant Sweatshirt, offered in neutral and dusty pastel colors, and its jersey lounge pants, which both quickly became best-sellers for the brand overall.

For this year, Sternberg plans on expanding the color ranges for each category, as well as introducing new styles for the brand’s sweats, underwear, T-shirts and socks. Entireworld’s products are available for purchase through its website and range in price from $15 for a set of socks to $275 for a jacket. 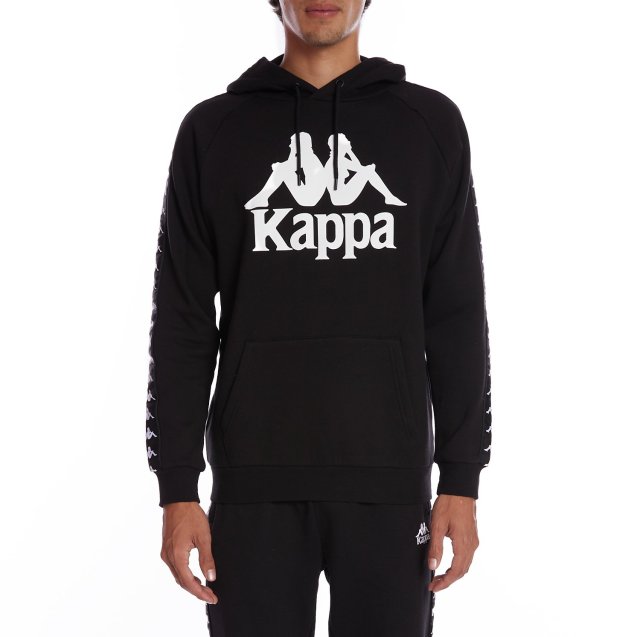 Fashion brand Kappa was experiencing growth in its men’s category for the last two years, but saw sales remain flat in 2020. Dre Hayes, president of Kappa USA, however, saw this as a success given the state of the overall fashion industry during the pandemic.

While the brand’s wholesale business decreased, Kappa’s online sales increased by 120 percent in 2020, which was fueled by sales of fleece tops and bottoms and its sandal and slides, especially in the men’s category. Hayes stated the brand is on track to increase by 55 percent this year from its fleece and sandal categories.

Kappa is sold on the brand’s website, as well as at Saks Fifth Avenue, Nordstrom, PacSun and Bloomingdale’s, and products range in price from $35 to $220.

How Six Female Entrepreneurs Found Success Amid the Pandemic

Why Headbands Have Reigned As a Popular Quarantine Fashion Trend