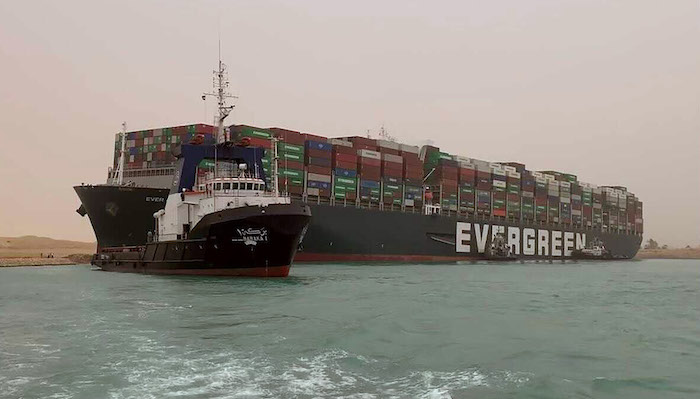 The 152-year-old canal ranks as one of the world’s most important shipping lanes that connect the Mediterranean and the Red Sea.

The blockage of the Suez Canal by Ever Given, a 200,000-ton ship that became lodged sideways across the waterway since Tuesday, has cost the world about $27 billion.

Based on calculations by Lloyd’s List, traffic stopped on either side by the blockage costs more than $9 billion daily.

Data compiled by Bloomberg show that at least 185 vessels, mostly bulk carriers, container ships, and oil or chemical tankers have been delayed and still waiting to pass through the vital waterway.

Shoei Kisen Kaisha, the Japanese owner of the giant cargo ship that wedged across the Egypt’s Suez Canal after being blown off course by high winds, has apologised for the disruption to global trade.

“Shifting the Ever Given was proving extremely difficult,” but the company also said it was “working hard to resolve the situation.”

The artificial sea-level waterway that was constructed in 1869 in Egypt ran into trouble three days ago after strong winds blew through the region and thrust sands along the banks of the canal. The waterway is less than 205 meters wide and is difficult to navigate, especially when there is poor visibility, analysts said.

Ever Given vessel, however, kept going on its charted course from China to Rotterdam. When winds reached a speed of about 46 miles an hour, the Qunt said the dust was swept up around the ship, which led the crew to lose control and the ship deviated sideways, blocking almost the entirety of the channel.

The 25-member-Indian crew nationals onboard the 400m-long (1,300ft) vessel that is registered in Panama to a Taiwanese transport company were reported to be safe with no detected oil leaks.

“We can’t exclude it might take weeks, depending on the situation,” Peter Berdowski, the CEO of Boskalis, a Dutch dredging and heavy lift company that constructs and maintains maritime infrastructure, said.

“It is like an enormous beached whale. It’s an enormous weight on the sand,” he said, noting, “We might have to work with a combination of reducing the weight by removing containers, oil and water from the ship, tug boats and dredging of sand.”

Less than 24 hours after the cargo ship blocked the canal, the waterway that provides the shortest sea link between Asia and Europe, has brought to the fore the importance of the canal that accounts for 30 percent of global daily ship traffic.

The following trademarks are the reasons the Suez Canal is the centre of the world’s attention following the blockade.

The Suez Canal accounts for 13 percent of all international maritime trade and holds its importance in reducing the travel time by half in comparison to the alternate route via Africa’s southern tip.

Based on calculations by Lloyd’s List, traffic stopped on either side by the blockage costs more than $9 billion every day.

The recent blockade of the canal is not the first time such an incident is happening. In 2017, a Japanese container vessel blocked the canal after it ran aground following reported mechanical issues. It was also closed from October 1956 until March 1957.

Its role as a cornerstone of international trade, particularly in oil, led the Egyptian president, Abdel Fatah al-Sisi, to announce an expansion of the vital waterway in 2014, a project promised as “a gift to the world.”

It costs $8 billion after the Egyptian president demanded the project be completed within a year, promising Egyptian citizens that it would prove to be an “artery of prosperity.”

The passage accounts for approximately 30 percent of container ship traffic globally each day, according to Reuters, with the alternative shipping route between Asia and Europe – navigating around the African cape – taking a week longer.

The Suez Canal officially opened on November 17, 1869. While the canal as such was the property of the Egyptian government, European shareholders, mostly French and British, owned the concessionary company that operated it until the then-President Gamal Abdel Nasser nationalised it.

Despite economic headwinds amid COVID-19 disruption, the canal’s revenues have not dipped. On the contrary, the Suez Canal Authority chairman Osama Rabie announced on May 4, 2020, that the canal reported a 2 percent rise, to $1.907 billion, up from $1.869 billion the previous year, in its revenues in the first four months of 2020.

80 million tons of crude oil are transported through the canal and it include both Northbound and Southbound transportation of crude oil for all tankers applicable for the Suez Canal.

428 million tons cargo or approximately 50 percent of all cargo transported through the canal are containerised goods.