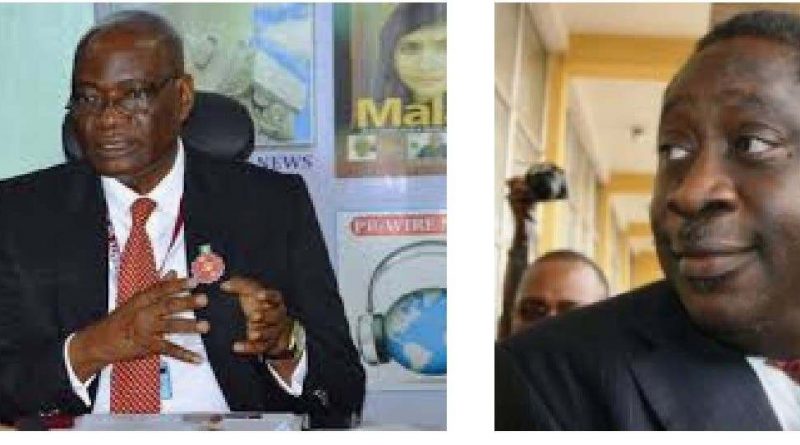 Committee of VCs calls for due process

We are waiting for government’s position ― NAPTAN

The crisis rocking the University of Lagos, UNILAG, took a new turn at the weekend as the Chairman of the Governing Council, Dr Wale Babalakin, SAN, gave reasons for the removal of the Vice Chancellor, Professor Oluwatoyin Ogundipe, while the local branch of the Academic Staff Union of Universities, ASUU, and the Committee of Vice Chancellors of Universities in Nigeria, CVC, faulted the action of the Council.

Babalakin, who briefed newsmen in Ikeja. Lagos, not only accused Ogundipe of trampling upon all financial guidelines in the university, he also called for the investigation of Ogundipe by appropriate agencies of government.

Babalakin, who reeled out a long list of misconduct against Ogundipe, accused him of not following extant rules and regulations regarding the management of the resources of the university.

“For instance, Ogundipe, without the approval of the Governing Council, renovated his official quarters for N49 million and also approved N41 for the Bursar to renovate his own official accommodation too. This against the regulations of the university.

“The financial guidelines of the University of Lagos gives the Vice Chancellor the power to spend not more than N2.5 million in some instances without the approval of the Governing Council and anything higher must be brought to the Council for approval.

“That is unacceptable. He must be investigated. We need to do that for us to start building the university. I can tell you that when we probed the account of the university, it was in tatters,” he said.

Babalakin also accused Ogundipe of forging university document and manipulating the process for the appointment of the Director of Works of the university.

“Under the law of the university, it is the Vice Chancellor that chairs some committees. There was this vacant position of the Director of Works of the university and some people applied. Somebody from the Lagos State Polytechnic came first in the selection interview conducted. However, Ogundipe changed the final results of the applicants to favour his own choice.

“But he did not know that some people in the committee had made a photocopy of the results of each applicant and when he was confronted, he had to cancel everything and made another call for selecting the Director of Works,” he said.

He also alleged that Ogundipe was allocating more funds for sundry issues like cleaning the university than funds for provision of facilities and direct teaching.

This, he argued, was to create loopholes to siphon money from the university.

Babalakin explained that the appointment of an Acting VC in the person of Prof Theophilus Omololu Soyombo, was done in line with the regulations of the university and that the Council did not breach any law.

He added that none of the Deputy Vice Chancellors was chosen for the post because their appointment was yet to be confirmed.

On whether the Senate of the university was right in rejecting Soyombo, Babalakin described the Senate’s sitting of last Thursday as null and void because Ogundipe was no longer the VC when it sat and that it was the VC that could call Senate meeting.

Ogundipe, in his defece, contained in a six-page document  titled “That University of Lagos may know peace: Submission of Prof Oluwatoyin Ogundipe, FAS , Vice Chancellor, University of Lagos to the Governing Council at its Special Meeting on Monday 13th May 2019, faulted some decisions taken by the Council.

In the document, he said among others that : (i) The composition of the Sub-Committee on Finance was defective ab inito.  Despite the strong reservation of some members of Council, because the council is blessed with the presence of an award winning Professor of Public Sector Accounting and Budgeting in the person of Prof Eddy Omolehinwa, Pro-Chancellor decided to appoint a Senior Lecturer in Chemistry with no accounting background or experience, Dr. Saminu Dagara.

He also pointed out that: (vi) Sub committees by convention are usually given a time frame within which to report on their findings , none was given this Committee, it is therefore no wonder that the committee spent over six months on the assignment, sat for over 40 times and in the process incurred a bill of over 7 million by way of sitting allowance , hotel expenditure as well as feeding at meetings, 80% of which went to Dr. Saminu Dagari. It is also important to point out here that the External Audit Firms appointed by Council for the regular one-year audit of the University’s finances only cost 5.2 million naira only.

However, the Senate of rhe university, which held an emergency meeting on the issue, said the action of the Council was a violation of Section 3 (8), (9), (10) of the Universities (Miscellaneous Provisions) (Amendment) Act 2003 on the removal of the Vice Chancellor of any Federal University in Nigeria.

The meeting, which was chaired by Prof Chioma Agomo, also held that due process was not followed in the purported removal of Ogundipe.

The resolution, which was signed by Agomo and others, also rejected the removal of Ogundipe and passed a vote of confidence on Ogundipe.

It also rejected the appointment of Soyombo and called for the dissolution of the Council, alleging that it had gone beyond its limits.

The Chairman of the UNILAG ASUU, Dr Dele Ashiru, while speaking on Sunday with Vanguard, said Babalakin only wanted to create chaos and anarchy in the school.

“Babalakin has arrogated powers that he does not have under the law to himself. He is doing all this to create chaos and anarchy on campus. His intention is for everything to be turned upside down so that the government can dissolve the Council and remove the VC and appoint a sole administrator. We are law abiding and we know how to handle people like that,” he said.

He faulted the appointment of Soyombo and wondered which legitimacy he would claim to act as the VC of the university.

The CVC, through the Secretary General, Prof. Yakubu Aboki Ochefu, at the weekend said the removal of Ogundipe was not in line with due process.

It also faulted the appointment of Soyombo, saying that it would be difficult for the Senate of the university to work with him.

“The Council has gone ahead to announce a new Vice Chancellor. The extant laws state that one of the Deputy Vice Chancellors should be appointed to act. UNILAG has three deputy VCs, none of them was appointed as the Acting VC and somebody else entirely was appointed. This is going to pose another problem because Senate will not allow such a person to chair their meeting because they didn’t know him within the context of laws establishing universities” he noted.

NAPTAN calls for due process

The National President, National Parent Teacher Association of Nigeria, NAPTAN, Haruna Danjuma, urged the Federal Government to allow due process be followed on the matter.

“At primary and secondary school levels, we have Parent Teacher Association and at tertiary level, we have Parents’ Forum, so, we are involved. I know that the government is studying the situation and would make public its decision soon. We are waiting for their decision,” he said.

Meanwhile, Soyombo is expected to resume office on Monday, while Ogundipe has gone to court to challenge his removal.