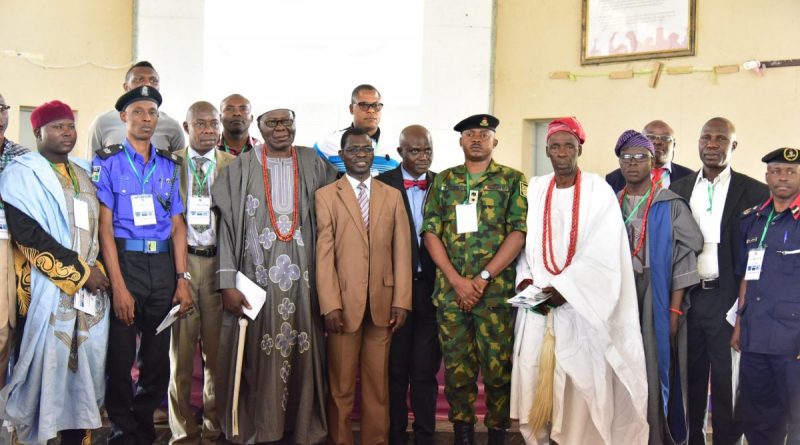 Consensus opinion by participants at a two day security summit held at Federal University of Technology Akure, FUTA on Wednesday, says in order to tackle emerging security challenges and secure lives and properties in campuses across the country, universities, host communities and security agencies must work together.

The convener, a Senior Security expert, from the International Institute for Security and Government Studies, Abuja Mr. David Okoror identified the University as a soft target for violent criminals and terrorists, against which proactive measures must be put in place by relevant stakeholders to stave off security crises.

Delivering a lecture titled: “Imperatives and Options for Developing University Security and Safety Mechanisms and the Role of host Communities”, Mr. Okoror said the nation is in a state of national security emergency, which can only be checkmated through collective efforts of all stake holders.

He said “general indifference to issues of security and safety is the bane of the society and urged security operatives and university management, to create awareness and necessary infrastructure that will help safeguard the life and property of students on campus and in the neighboring communities.”

Okoror stressed the need for collective and community policing of the Universities and the community at large to achieve a crime free society.

The participants, while reacting to Okoror’s paper, called on the management of FUTA and other higher institutions across the country, to install Close Circuit Television (CCTV) in strategic locations on campuses.

The CCTV, according to them, should be  adequately monitored by trusted hands so that footage of criminal activities could be viewed, which will aid the apprehension of perpetrators of criminal acts on campuses.

In his remark, the Vice Chancellor, Professor Joseph Fuwape represented by Deputy Vice Chancellor, Academic, Professor Rufus Ogunsemi, said that the forum was constituted to periodically brainstorm and  fashion out strategies to tackle the security challenges in the environment.

Professor Fuwape said the University community is a special one because it was established and dedicated to nurturing and mentoring generation of leaders.

He emphasized  that for a university to function optimally, it must operate in a  secure environment  conducive for learning, research and business growth within and around the Institution.

Fuwape urged stakeholders and members of the University community  to be at alert as it is evident that the security agencies cannot tackle security challenges without input from members of concerned communities.

He said it is the responsibility of everyone to complement government efforts by working together as a unified whole to secure our immediate environment.

The Chairman, Campus Security Committee, Professor Olusola Agbede, represented by Professor Adeniyi Taiwo, said the security summit is an aspect of community policing which brings about the involvement of individuals and corporate bodies in the security arrangement of the Universities.

He urged stake holders at the summit to seize the opportunity of the lecture and reach a workable resolution that can be implemented on campuses and environs.

The governor of Ondo State,  Arakunrin Rotimi Akeredolu (SAN), represented by the Permanent Secretary, Cabinet Office – Mr. Gbenga Elewutu, stressed that FUTA and its host communities must collaborate to achieve effective security of the University and its environs.

Akeredolu urged everyone to make concerted  effort to keep their environment secure and emphasized the importance of information dissemination on security  and safety of lives and property  as the duty of everyone, and not that of law enforcement agencies alone.

Representatives of Security agencies, included those from the Nigerian Army, The Nigerian Police, The Department of State Security (DSS), The Nigerian Security and Civil Defence (NSDC), and other para military bodies.

They all stressed the importance of  collaboration between the uniformed services  and members of the general public  to tackle the menace of insecurity.

They said Intelligence gathering is key  in nipping security challenges in the bud and tasked members of the public to provide timely and credible information that will  help in the process of crime prevention and detection.

The traditional fathers in the host communities, commended FUTA Management for organizing such relevant summit at a time when security in the nation is at its lowest ebb.

They promised to reduce the infiltration of criminal minded individuals from their communities.

The Student Union President of FUTA, Abraham Esedere, thanked the convener of the summit and the Management for driving the summit.

He said it is time to start working on  resolutions that would take the security level to the next one and secure Nigerian campuses. He said students are ready to work hand in hand with Security Operatives to help achieve a crime free campus and society.